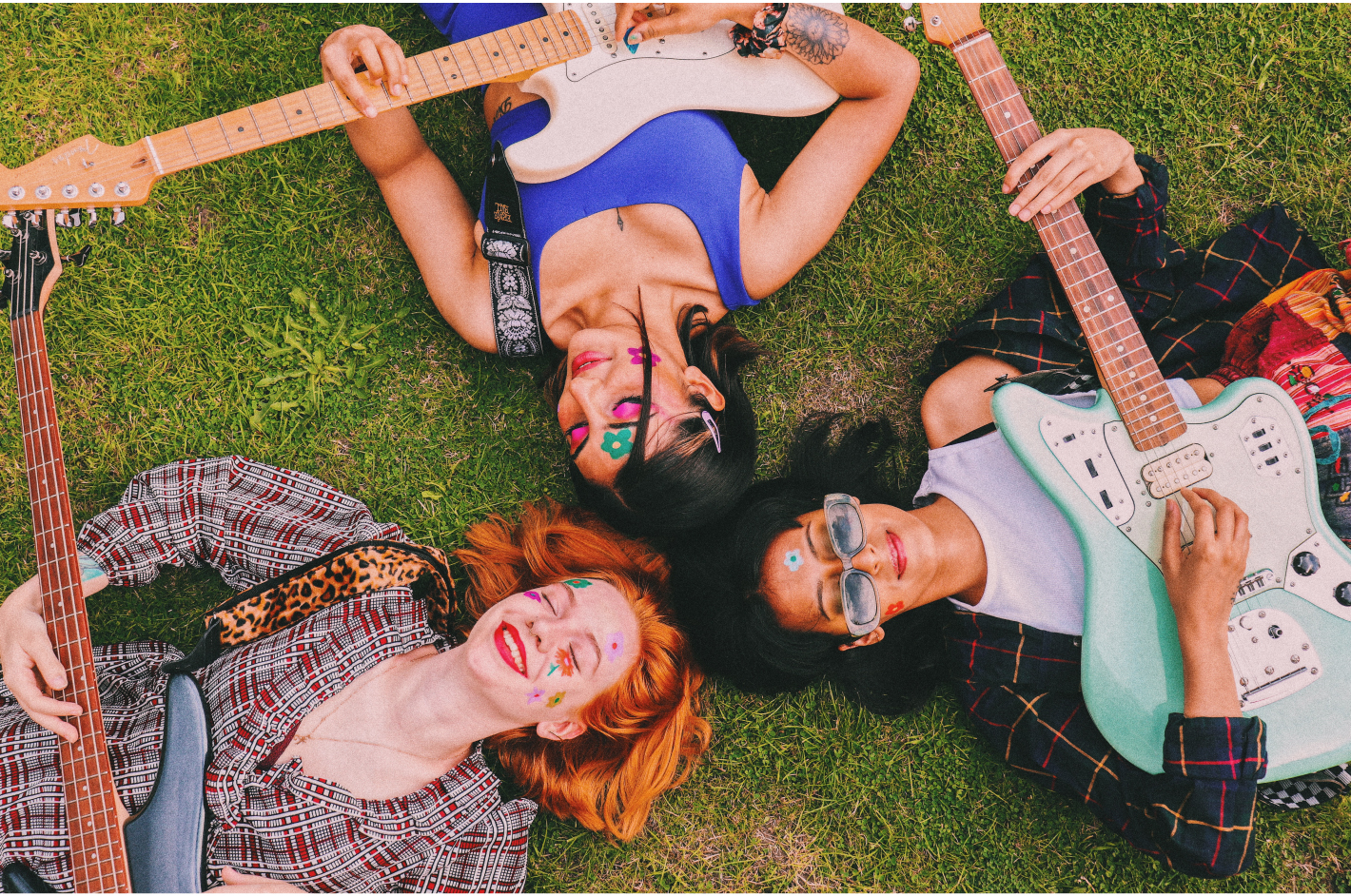 Hamburger Momma: Influenced by a variety of genres from neo-soul, to modern pop, Hamburger Momma makes use of catchy guitar-driven hooks, vibrant synth arrangements and ethereal vocal melodies to craft a unique style of indie pop, coloured with an electronic edge. The band explores and portray their love for the arts through their music, creating colourful and dynamic tracks. Having a broad passion and appreciation for all types of sound, their work is progressively evolving and being refined which shows a balanced reflection of their own individual musical journeys. Having only formed recently, there is a bright and passionately youthful energy to the band, as well as a dedication that makes them a unique and exciting ensemble. Through their work, they wish to encourage other females, both, with a new passion for the arts and for those who have already developed their practice, to support each other and to create a fair, safe, and compassionate environment to collectively strive in.

HEALS- Hailing from the heart of the UK, HEALS formed in 2019 and managed to get a rehearsal or two in just before the pandemic changed everything. Determined to inject colour into a black-and-white landscape of music, HEALS have worked hard over the past year to craft a bold and energetic sound. Due to make a statement through a quartet of pounding drums, euphoric guitars, and soaring vocals, HEALS endeavour to pull out the long hair of indie, dismantle conventions, and upset your nan in the process.

The Sunset Beach Hut are a Birmingham-based Indie-pop quartet. Debut singles ‘Comfort’ and ‘Upside-Down’ both were awarded BBC Introducing Shropshire’s Track of the Week and their previous single ‘Bury’ has amassed nearly 30,000 streams on Spotify, and they look to follow this success with future releases. The three years since their formation have been filled with some incredible gigs, selling out The Sunflower Lounge and supporting some of the UK’s best upcoming bands including SPINN, Stereo Honey and Calva Louise, taking their first trip down to London supporting Shields and securing a place at international music festival Focus Wales 2019. After a brief hiatus in 2019, the band returned with their most recent singles ‘twenty//25five’ & ‘Funk’, which received recognition from BBC Introducing Shropshire and Birmingham’s Switch Radio, and also released their debut EP ‘ex-blurst-ist’…

Hit The Floor are an Alternative Indie-Pop band comprised of 5 hilarious, talented and gorgeous musicians and formed in Digbeth, the creative heart of Birmingham. The band started out in October 2018 with only 3 members – Sam Cooper on the drums, Olly May on guitar and Carys Lewis on the mic. They began experimenting with their sound, sharing and exploring their individual music tastes and writing original music. From the get-go the band had a broad range of influences, from the likes of Two Door Cinema Club and The Wombats to The Free Nationals and Tom Misch.
By January 2019 they had picked up 2 new members, Louis Maylin on the bass and Brendan Ryan on lead guitar. The band released their debut single, ‘Shoes’ in May 2020 and were overwhelmed by the response from both new and old fans. ‘Shoes’ embodies the band’s Pop-Punk influences
and merges them with elements of Funk, Rock and Indie to create a fun, high energy track with a complete unique sound. Their second single City Tricks’, explores a very different side of this young bands musical palette. Hit the Floor once again deliver complete originality with this track, and by
incorporating elements of Jazz into their Indie style, and with some Neo-Soul inspired vocals, ‘City Tricks’ is a beautifully crafted feast for your ears.
These five musicians have a flare for songwriting, a natural chemistry on and off the stage, and most importantly professional musicianship beyond their years which really sets them apart.