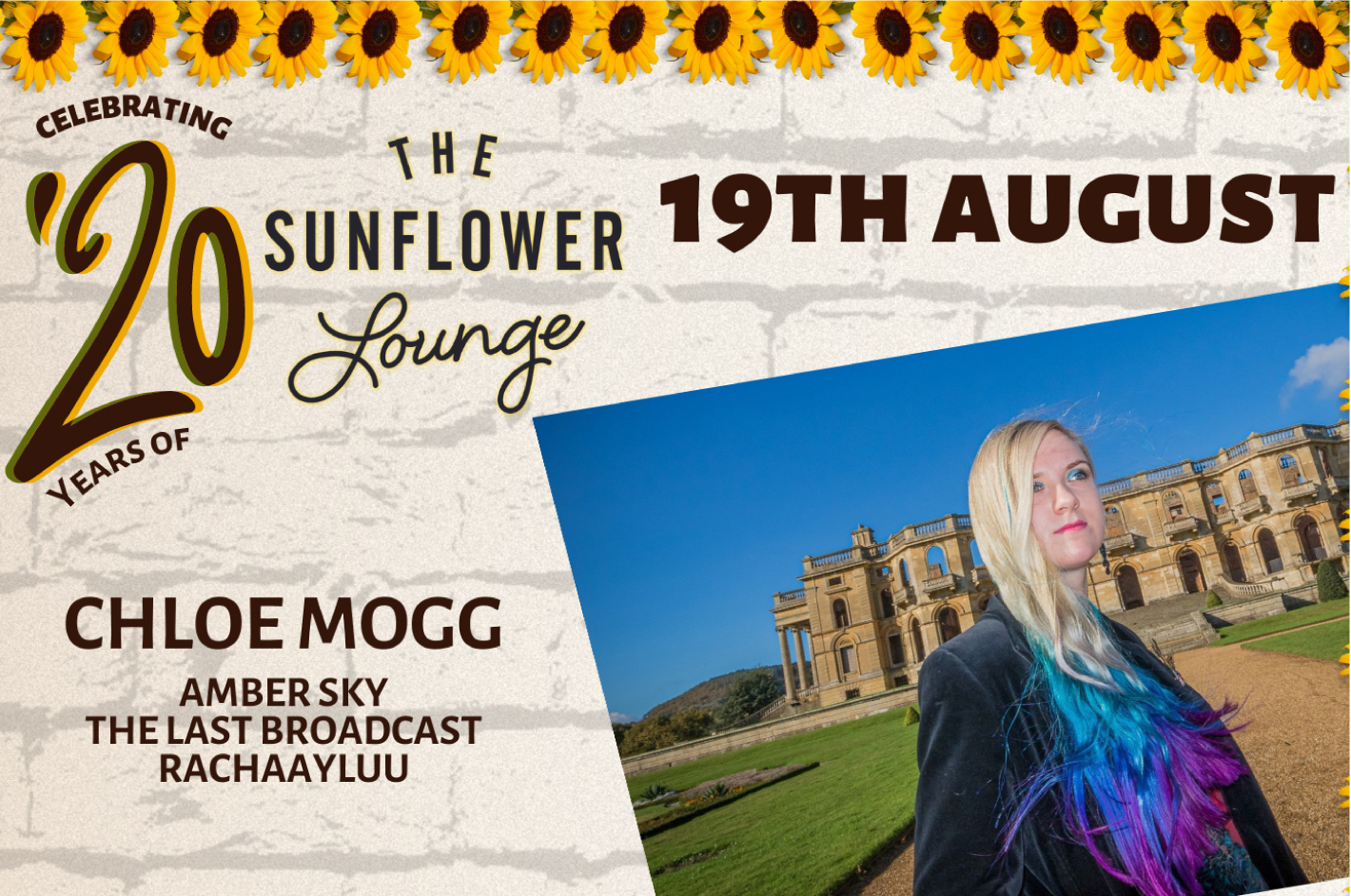 Chloe Mogg is an award-winning singer-songwriter, music journalist and PR that aims to bring life and colour to every project she’s part of. Known for her quirkiness, ‘parrot’ hair & smile, she haunts the audience with her ability to tell a story with only her voice, guitar and ‘strange’ effects.

With influences from Jeff Buckley, Nick Harper, Chris Cornell and Alanis Morissette to name a few, Chloe showcases a wide range of inspirations. Supporting artists such as Nick Harper, Jon Gomm & Quill, and playing on festival lineups with artists such as Don McLean, Kaiser Chiefs and Jake Bugg, Chloe’s in her natural habitat on stage. Described as ‘one of the hardest working musicians in the Midlands’ by Andrew Marston of BBC H&W, Chloe continuously looks for her next challenge. A big advocate in raising awareness for ‘invisible’ illnesses, Chloe was featured on BBC Radio 1’s Minute of Me & on BBC News talking about what it’s like being a disabled musician.

Chloe is currently in the recording process of her debut album. With debut EP ‘Thalamus’ getting radio play on BBC Radio 6 & BBC Introducing, the songwriter released three singles in 2020 – electronic number “Judgement Day”, trip-hop single “Helping Hand” and ethereal track “Attack”. The three singles showcase that Chloe doesn’t like to be limited to one genre. Receiving the ‘Local Hero’ at the AIM Music Awards in 2021, Chloe is ready for whatever the future may bring her way.

When 90s grunge meets modern rock, with a dash of indie, you get Amber Sky. Formed in Birmingham, UK at the end of 2021, they’ve played regular live shows and prepare to release their first EP. Fans of Arctic Monkeys, Nirvana and Måneskin will love their music.

”Building upon England’s rich pop and alternative music heritage, while diving into the (often dark) depths of human experience, The Last Broadcast are a decidedly alternative band with a flare for the catchy and moving.” – Atwood Magazine

The Last Broadcast craft melodic and soulful soundscapes that function as a vehicle to question the human condition. 90’s and 00’s influences shine in The Last Broadcast’s work, with nods to the likes of New Radicals, David Gray and All Saints.

The Last Broadcast first arrived with debut release ‘’Daisy’’ back in February. Whilst the track is built around a lush, piano led arrangement with inviting melodies and mournful horns, the lyrics wrestle with grief and trauma. The response to the track was encouraging, with success being had on the national radio circuit (Islington Radio’s Sonic Sunday, BBC Introducing Coventry & Warwickshire, Amazing Radio) as well as amassing nearly 6000 Spotify streams in a mere 2 months.

Further building on a fascination with the sound of the ‘00s (Moby, All Saints, Zero 7), The Last Broadcast deliver a meditative anthem on new single ‘’Dissolve’’. Featuring frequent collaborator and vocalist Shannon Farmer, as well as the mastering of Chris Parmenidis (Amy Winehouse, All Saints), ‘’Dissolve’’ is an ‘00s inspired, celestial ballad in which the natural world is anthropomorphised and called on to be an anchor amidst the ever increasing pace of modern life.

Originally from the West Midlands singer-songwriter Rachaayluu released “Sober” co-created with Dan James Griffin in December 2019, incorporating her euphoric vocals, this track edges between the line from pop to R&B. ?

She released a similar track in March 2020, the catchy R&B song, “Sunday”, with a sound that BBC Radio 1’s Phil Taggert called “really current, a stand out performance”. ?After performing on the Nozstock Festival stage she was described as “ A soulful and lyrical star” by BBC Introducing’s Andrew Marston, she has been compared to the likes of Jorja Smith, Mabel and Anne-MarieHer second release of 2021, “Obsessed ” debuted on BBC Introducing, since becoming her most popular release so far. Rachaayluu has an ever-changing, vibrant sound that refuses to be unheard.