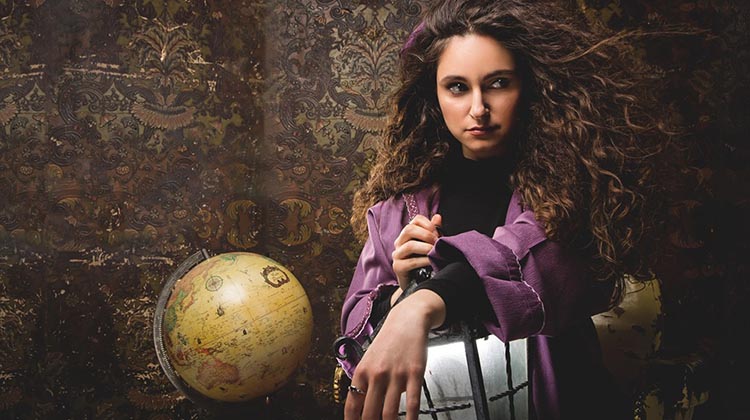 For centuries, music has been used to tell stories. Some of the greatest legends, myths and histories of humanity are written in song. Yet in the present day, it could be argued that the art of storytelling through music is something many have left behind. This is not the case for Gazel, the multi-instrumentalist, artist and producer whose masterfully woven, exquisitely textured music has already drawn comparisons to the likes of Björk, Kate Bush and Bat for Lashes.

Her upcoming debut album, Gazel’s Book Of Souls, is a thoughtful, philosophical work featuring old-world influences imbued masterfully into modern pop and electronic sensibilities. These eclectic soundscapes provide the medium for the tale of a young girl who leaves her village after a devastating fire and sets out on a journey to clear her grandfather’s name – encountering a number of intriguing characters along the way.

“When writing Gazel’s Book of Souls I knew I wanted to create a mythological structure of the unconscious mind – like an imaginary psychic map,” says Gazel. “I had a theme for each song, each representing a different aspect of the human psychic tendency – grief, growth, technology, symbolism, problems of identity, and belief in the mind’s fabrications. Gazel’s Book of Souls is an album that explores dreams, consciousness and the great mystery of the human mind.”

“born from another dimension… she recalls everyone from Kate Bush to Robyn, all while sculpting her own identity” – CLASH

Watch the official music video for ‘You’re Not Funny’ below:

Fully aware of the current state of Urban Outfitters avocado anxiety Pop, gürl is the antidote to white boys with acoustic guitars. Bringing ethereal dark neo-soul with an aftertaste of hip-hop and rock, it is refreshing to see a young group of people hell-bent on making music more than just background noise once more.

“You will never find a line of ours that is there to just fill space. We will never sing about being young forever, lest it be tackling the naive tipsy fumblings of youth.”

Watch the official music video for ‘HEAVY HEART’ below:

A sound that is reminiscent of the romantic 80s synth-pop era. The Navettes are dominating the Manchester music scene. Having played some of the cities most acclaimed venues such as Club Academy, Gorilla and the O2 Ritz, showcasing their energetic live performance and infectiously catchy songs while pioneering the revival of the 80’s sound.

Support from ITV, Yamaha and BBC Introducing has seen an overwhelmingly positive response and fuels the fire for even bigger and better things to come.

Watch the official music video for ‘WHAT ABOUT PARIS?’ below: